America’s Favorite Noisemaker: What Thundersticks Are, Why You Need ‘Em, Where to Use ‘Em 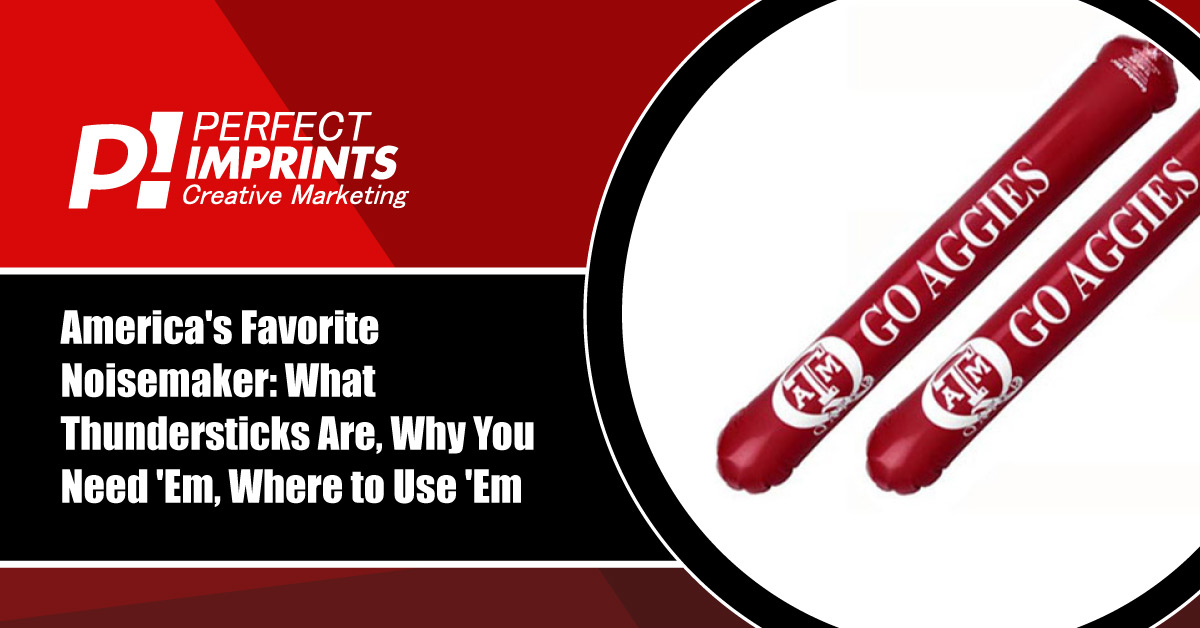 When an NBA or college basketball player steps up to the line to take free throws during a game, the fans sitting behind the basket that he’s shooting at will do almost anything to distract them.

Fans will put their hands up in the air and scream and shout. They’ll also hold up signs and posters to try to break a player’s concentration. Some superfans have even stripped down to next to nothing to capture the attention of players.

Custom thundersticks can be used during more than just sporting events, too. Here is everything you ever wanted to know about thundersticks.

If you’ve ever sat and watched a basketball game, a football game, or any number of other types of sporting events, you’ve no doubt seen thundersticks waving across your TV screen. But just in case you’re not familiar with what thundersticks are, let’s start things off by breaking it down.

Thundersticks were first used about 25 years ago by a Korean baseball team called the LG Twins. Since then, they’ve found a home at stadiums and arenas all over the world.

Thundersticks—which are also sometimes called BamBams or ThunderStix—are inflatable noisemakers made out of vinyl that come in pairs of twos. A person can generate a lot of noise by taking two thundersticks and banging them together.

Thundersticks can also be customized in a variety of different ways. They come in a wide range of sizes and colors, and companies have learned how to put almost anything that people want onto them.

But no matter how they’re customized, thundersticks have transformed into some of the most popular spirit items at sporting events these days. They’ve also started to find a home in many other arenas, too, which is what we’re going to discuss next.

Where Are They Used?

But one thing that has become apparent over the years is that thundersticks aren’t just for stadiums anymore. They’re starting to pop up at lots of other events as well.

In addition to sporting events, thundersticks are also often found at:

Why Do People Love Them So Much?

The next time you see someone using thundersticks, either on TV or in person, take a look at their face. Nine times out of ten, the person will have a big old smile stretched across it.

That’s because people love using thundersticks once they get them into their hands!

Why? Well, there are a lot of different reasons why thundersticks make people so happy. We’ll start by discussing how much noise they make.

Under normal circumstances, a person can hoot and holler and clap their hands together as much as they want during an event. But there’s a good chance that no one outside of those sitting right around them will hear them.

But with thundersticks, it’s not difficult at all for people to fill the air with noise. It’s amazing how much noise a single set of thundersticks can make!

And when you have a bunch of people using thundersticks at the same time? It sounds like a symphony is taking place at a sporting event, a political rally, or another type of event.

But the noise isn’t the only thing people love about thundersticks. They also love the fact that they’re soft and won’t injure anyone when they’re being used. This allows for people of all ages, no matter how young or old, to use them without worrying about injuring others.

It’s not just people that love thundersticks, either. Businesses have come to love them, too! There are lots of businesses throughout the country that have started to use thundersticks as part of their marketing campaigns.

Let’s continue by talking a little bit about why businesses see thundersticks as such great marketing tools.

How Can They Benefit a Business?

If you’re thinking about using thundersticks to promote your brand, it won’t take you long to see why they’re so effective. They can benefit the average business in so many ways when they’re used for marketing purposes.

For starters, businesses can customize thundersticks to look like pretty much anything they want. They can choose from almost any colors they want during the customization process and make sure that their thundersticks stand out.

They can also use thundersticks to advertise both their business name and their business logo if they want. By working with a reputable company that specializes in producing promotional products, they can get their hands on high-quality thundersticks.

And once businesses start passing their thundersticks out, they won’t have any trouble making noise—both literally and figuratively—when people begin using them. It’ll be impossible for people to miss the name and logo of the business that purchased the thundersticks and handed them out.

People who are attending an event will also see the thundersticks and make a mental note as to which business provided them. Those at home will be able to see thundersticks, too, thanks to their bright colors and the fact that they’re everywhere.

All of these things make thundersticks attractive marketing tools for businesses. They’re more than happy to invest in them when they see what a great return they can get.

What Are the Different Types of Thundersticks?

Would you like to buy some custom thundersticks for your business and put them to good use? Before you do, you should educate yourself about some of the different types of thundersticks on the market at the moment.

Some of the most popular thundersticks available right now are the BamBams Noisemakers. Here are some details on them:

This is only the beginning when it comes to thundersticks, though. If you want to try another option, you can also test out Custom Colored ThunderStix. Check out some of the most important details about them below:

There is also a new high-tech thunderstick option available to those who want to wow people. The Light-Up BamBams Noisemakers are becoming a fan favorite. Take a look at why so many people love them already:

As you can see, there are all kinds of different types of thundersticks for you and your business to choose from when you’re creating them. You can pick the one you like best and stick with it or mix and match them based on the types of events you’re going to use them at.

Regardless of which approach you decide to take, the thundersticks that you order will pack a punch in the noise department. All of these types of thundersticks are designed to inject a lot of life into an event through the power of noise.

Can They Ever Be Reused?

Each of the three types of thundersticks that we just talked about cannot be reused. People can take them home and use them until they run out of air. But once the air is gone, they can’t be inflated again.

So, that begs the question: Are there any thundersticks that can be reused over and over again?

For a long time, the answer to that question was no. Thundersticks could only be used once by the businesses that invested in them.

But today, some thundersticks are reusable. The Inflatable Fan-ta-Sticks Noisemakers, for instance, can be reused as many times as you want once you buy them.

Unlike regular thundersticks, Fan-ta-sticks are made out of a more durable type of vinyl that allows people to reinflate them once they lose all their air. They’ll look like new again once they’re reinflated, and they’ll continue to help people make lots of noise during events.

But outside of the fact that they’re reusable, these thundersticks are just like the other types of thundersticks we’ve mentioned. They come in a bunch of different colors, including red, blue, green, orange, yellow, and pink and they can be customized to fit your specific needs.

How Much Do They Cost?

Now that you know almost everything there is to know about thundersticks, you probably have just one question: “How much do they cost?”

It’s a valid question. No matter how effective promotional products might be, their cost plays a big part in whether or not you’ll invest in them. You don’t want to blow your marketing budget on promo products.

You’ll be happy to know that the cost of thundersticks could very well be the best part about them. Despite all the advantages that come along with buying them, they cost a lot less than most other promo products do.

BamBams Thundersticks are available for as little as 33 cents each when you buy them in bulk. Custom Colored ThunderStix, meanwhile, start at $1.23 each. And even Light-Up BamBams Noisemakers and Inflatable Fan-ta-Sticks Noisemakers start at just $1.10 and $1.84, respectively.

You can’t beat those prices when you’re purchasing promo products. You’ll get plenty of bang for your buck from them when you give them out to people at events.

Do you want to give the students at your school a way to show off their school spirit? Or do you want to promote your business at an event in your community?

It’s easy to do it when you have thundersticks on your side. You’ll put a smile on people’s faces when you give them thundersticks, and you’ll be able to sit and watch them use thundersticks for hours on end without getting tired of them.

If you would like to hear about how thundersticks can benefit your specific business or organization, we would love to talk to you more about them. Contact us today to see which thundersticks might be right for your next event.