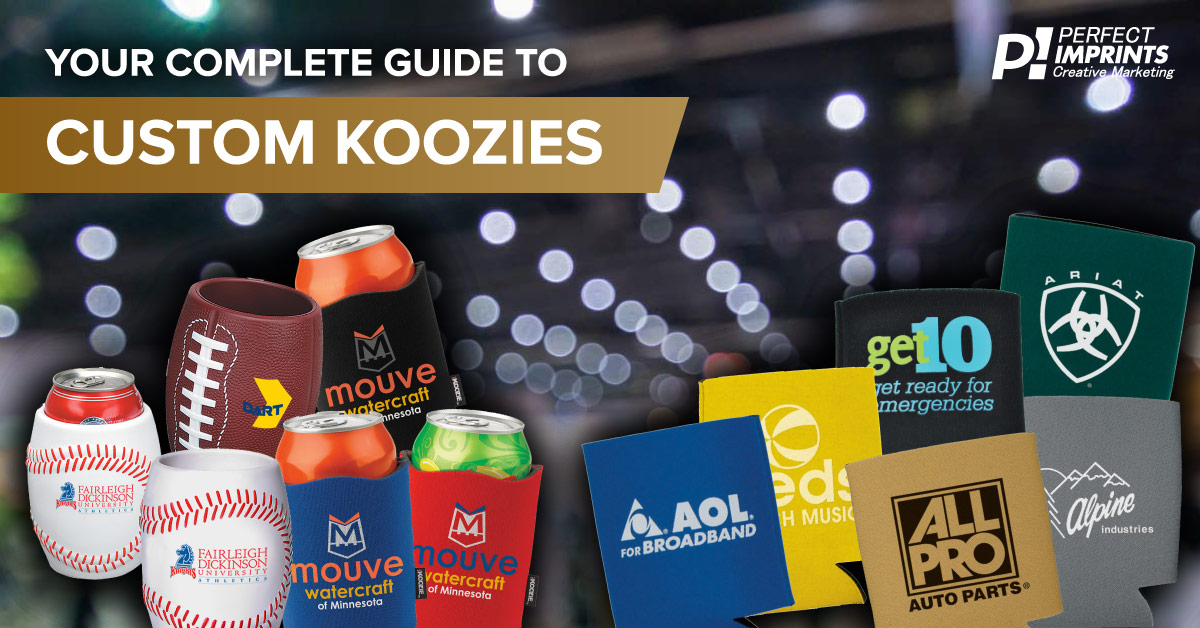 Posted at 6:00am in Drinkware, Promotional Product Ideas by Patrick Black
Share

When you’re laying on the beach or relaxing by the pool what do you always have with you? A beer, of course, in a koozie to keep it cool in the sun.

This staple of summer and outdoor activities has seen a surge in popularity as custom koozies started appearing all over the internet. Custom koozies are the new “it” party favor from weddings to college graduations.

Here we will walk you through how the koozie came to be, if koozies, in fact, do keep beverages cold, why they are seeing a sudden surge in popularity, and how to make your own custom coozies.

We will also show off some of our awesome custom koozies that are a step up from what you could make at home. Let’s get started diving into the world of the lowly beer koozie.

It’s important to note that the term Koozie is a trademark which represents Koozie brand beverage insulators. Since this was the first brand that went to market in the promotional products industry, the trade name is synonymous among most people when referring to beverage insulators.

All About Custom Koozies

Everyone knows the word koozie. It is ubiquitous with summer fun and cold alcoholic beverages. The beer koozie is one of the few things that make day drinking an acceptable activity.

But, where did these little foam, drinking miracles come from? Hone in on your koozie history below.

The History of the Beer Koozie

When dealing with something as commonplace as coozies you would think it would be simple to figure out where they came from. However, there is a bit of controversy over who invented the koozie.

There are stories from around the world on the origins of this beverage insulating device.

Some give Australian surfers the credit for coming up with what they call “stubby holders” since the originals were made of cut up old wetsuit material. Others will insist that Great Britain can take credit for the invention.

For centuries, women in the UK would knit tea cozies for their teapots to keep the tea warm. It would only be natural to transfer this technology to keeping beers cold? Right? We really don’t know.

What we do know is that the first legal patent, for what us Americans call the koozie, got granted in 1981. The patent was granted to Idaho native, Bonnie McGough and the patent was titled “Insulated Beer Cozy”. It went on to describe the invention as:

While Bonnie was awarded the patent, another company in San Antonio began producing a nearly identical product. They began to mass produce this clunky non-collapsible pre-cursor to the modern collapsible koozie and everyone fell in love.

This was the first time they were being used as marketing materials, mainly in sports stadiums, and people went crazy over them. They have become a summer and sports staple ever since.

So, now we know where coozies came from but there is still a gnawing question. Do they actually keep beer cold or have we just become obsessed with the novelty of the squishy material around our beverages?

Folks over at the Smithsonian magazine did an unofficial experiment on the effectiveness of a koozie on keeping a bottle of beer cold. The experiment included three bottles of beer; one in a koozie being held, one held without koozie protection, and another koozie-less version that was set down in between gulps.

They took the temperature of each at different time intervals and came to the following solution: Koozies do help keep beer cold, kinda.

According to the results of their experiment, a koozie will help your beer stay colder than an unprotected beer. But, the best way to keep your beer cold is to put it down as often as possible. The heat of your hand affects the beer most.

Now, if we were to redo this experiment I would include the fourth bottle of beer. It would be a bottle in a koozie that was also being put down between sips. My thought is it would end up being coldest at the end of the experiment.

Someone, go be a scientist, perform this experiment, and report back here with your results on our Facebook page! We have no doubt you have several different types in a drawer in your kitchen.

Is it Koozie or Coozie?

Whether your koozie design is a football shape or one meant for a bottle, the question remains…how the heck is it spelled? We have even been going back and forth in this article.

Because, technically, since it is a made up word, either will work. The official brand is spelled Koozie. But, if you’re not referring to the actual brand name they are often still referred to as koozie. Other names include coozies, cozy, huggies, can huggers, coolies, beverage insulators, and many more.

Koozie is the most frequently used name here in the United State. Coozie is the term primarily used in the United Kingdom. This may go back to the previous origin stories as coozie is awfully close to the word cozy huh?

Most grammar nerds from the states would say don’t use the term koozie unless you are referring to Koozie brand Koozies. But, it’s up to you, seriously, spell it however you want. We won’t be offended.

Why the Sudden Popularity of Custom Koozies?

Whether you spell it coozie or koozie you can’t deny that they are experiencing a new renaissance of popularity. Custom coozies are growing in popularity exponentially.

So, why the sudden explosion? It may correlate with the growing number of beer lovers in this country. Beer has become a hip trend. Craft beer is available everywhere and you can even have a homebrew station in your basement.

With the rising love of beer, more and more people need a solution for keeping their beverage cool.

Customization, of everything, is also a huge trend right now. Companies love putting their logo on things, weddings need more and more personalized favors, and other celebrations are now looking for custom koozies to grace their tables. The decoration methods for koozies has become more advanced with edge-to-edge full-color printing, making the entire surface a blank canvas. Additionally, with the popularity of stainless steel tumblers, the invention of stainless steel koozies has been successful.

There is also a surge of popularity in DIY crafts and using at home cutting machines to customize everything. Next, we go over how you can customize a coozie of your very own using heat transfer vinyl.

How to DIY a Custom Koozie

If you have a cutting machine, like a Silhouette or Cricut, it’s quite simple to customize your very own koozie. You need a few supplies:

Using the program that comes with your cutting machine you can design your koozie. The surface of the koozie is about 4″x4″. If you want to have a design that wraps around the whole thing you’ll want to make two sets of the design, both fitting inside the 4″x4″ space.

Once you have your design you’ll cut your vinyl. The most important step to doing a successful heat transfer vinyl design is making sure to “mirror” your image before you cut it. This is super important if you have any words in your design.

If you forget to mirror the design, your words will be backwards when you press your vinyl. Not a good look.

So, once the vinyl has been cut, you need to remove any excess unneeded vinyl. Then cut the design out to the size you’re working with. If you have multiple colors you are going to press them one at a time.

Do your base color first then layer as you want them to overlap. You’ll put the koozie in your heat press each time you do a different color of vinyl.

While this can be simple, it can take a few tries to get it right, and you need a lot of expensive equipment. The good news is that there are a ton of very affordable custom koozie options which will have your design professionally printed on them.

Getting a professional to handle the personalization is an even better idea if you need to make koozies in bulk. For instance, if you want to put your company logo on a ton of koozies to send out in a promotional bundle, DIY isn’t a good option.

If you need 1000 koozies to hand out at your school’s football games, order them. If you want one cute koozie with a kitschy phrase specific to you? DIY that koozie.

In most cases, go with a koozie that folds flat. It is most desirable because it’s easy to press and stands up to the heat of application. Since the koozie is flat when it arrives you just have to apply the design instead of trying to work with a curved surface.

Either way, you have the power. Order a bunch of custom coozies or DIY one or two custom koozies for you and your friends. The possibilities are endless.

Can I Use A Koozie For Anything Else?

Ok, so you’re a social butterfly and you get coozies at all the events now. What do you do with all that foam love?

There are some great other uses for koozies that you have not considered. Here’s our list of best alternative coozie uses:

Make Sure You Add A Custom Coozie To Your Next Event

Any event that may encourage some daytime imbibing of alcoholic beverages deserves its own custom koozie. Is your son or daughter turning 21 and you’re having a big blowout party? Koozie it up!

Is your wedding going to be outside in the summer? Koozies required! Is your company hosting a field day on the weekend for employees at the park? Get a branded koozie to celebrate the occasion.

Whether you’re celebrating, want to make your customers feel special, or just want to keep your drink cold in style a custom coozie is the answer.

Ready to place an order for your next event? Check out our coupons and specials that are going on here and make sure to sign up for our newsletter for additional savings. We are able to make your design dreams into realities on pretty much anything from beach balls to foam fingers, and, of course, koozies!

Patrick Black, MAS, is the founder of Perfectimprints.com and has been in the promotional products industry helping businesses and organizations since 1999. When not geeking out over the newest and greatest promotional items, you can find him paddleboarding at the beach or hanging out by the pool with his wife, three kids, and his basset hound in Fort Walton Beach, FL.